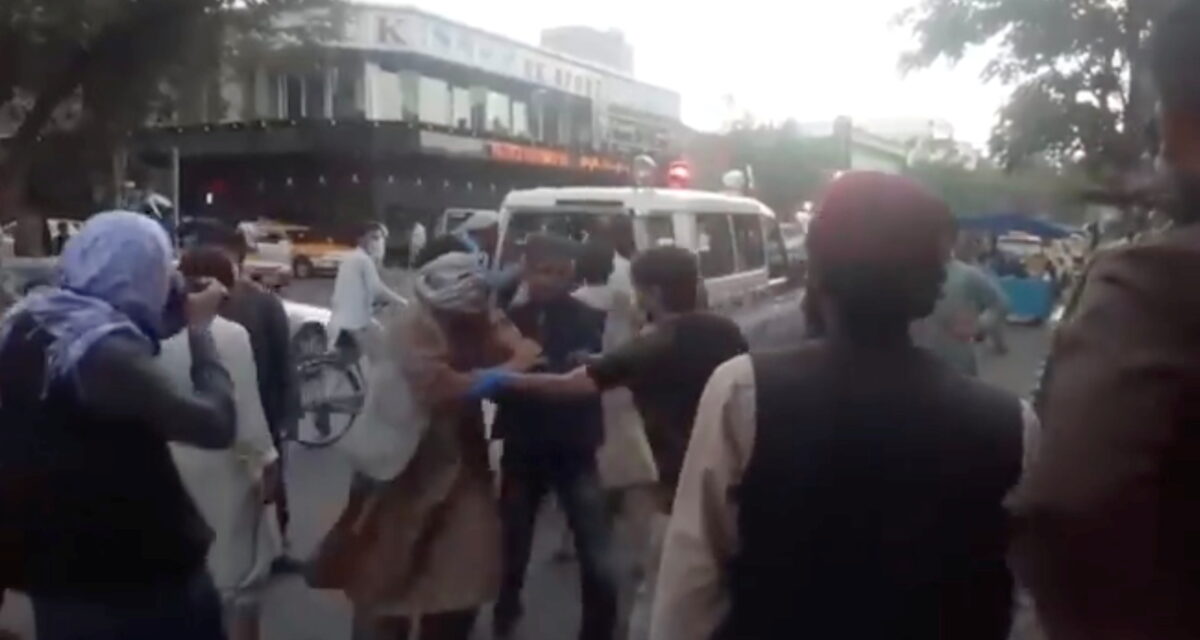 The explosions happened shortly after Britain’s armed forces minister James Heappey warned that there was a “very credible” threat that the airport in Kabul would be attacked by the ISIS terrorist group within hours.

At least two explosions took place near the airport in Kabul, Afghanistan, on Thursday, complicating efforts to evacuate Americans, Afghans, and others trying to leave the country before the United States pulls out its troops. A bomb went off at the Abbey Gate at Hamid Karzai International Airport, U.S. Department of Defense spokesman John Kirby said. At least one other explosion erupted at or near the Baron Hotel, which is a short distance from Abbey Gate. The bombs resulted in “a number of U.S. and civilian casualties,” Kirby said on Twitter. A Taliban official told Reuters that the initial explosion came from a suspected suicide bomb and left at least 13 dead, including children.

The Russian Foreign Ministry said the bombs killed at least 13 people. Fifteen others were wounded, the ministry said.

The United Kingdom’s defense ministry said it was “working urgently to establish what has happened in Kabul and its impact on the ongoing evacuation effort.”

“Our primary concern remains the safety of our personnel, British citizens, and the citizens of Afghanistan. We are in close contact with our U.S. and other NATO allies at an operational level on the immediate response to this incident,” it added.

Afghan media outlet TOLO News published photographs of injured and bloodied people in Kabul being taken to a nearby hospital on makeshift stretchers.

The explosions happened shortly after Britain’s armed forces minister James Heappey warned that there was a “very credible” threat that the airport in Kabul would be attacked by the ISIS terrorist group within hours.

Britain, the United States, and Australia had urged citizens not to travel to the airport late Wednesday.

The U.S. Embassy in Kabul warned of unspecified “security threats.”

“I can’t get into the specifics of the threat information but it was clearly regarded as credible, as imminent, as compelling,” Ross Wilson, the U.S. ambassador to Afghanistan, said on ABC News on Thursday just before the explosion went off. “Our intention was to urge Americans and, frankly, others, not to come to the airport.”

As many as 1,500 Americans remain in Afghanistan, U.S. Secretary of State Antony Blinken said Tuesday.

Thousands of people have been rushing to the airport to try to flee the Taliban-held country before U.S. troops withdraw.

Ahead of the Aug. 31 U.S. withdrawal date, and with Taliban militants stopping many from reaching the airport, several European countries had already stopped or prepared to halt evacuations while Canada ended its evacuation efforts.

“The reality on the ground is the perimeter of the airport is closed,” General Wayne Eyre, Canada’s acting chief of defense staff, told a press conference earlier Thursday. “The Taliban have tightened the noose. It’s very, very difficult for anybody to get through at this point.”

U.S. President Joe Biden’s scheduled meeting on Thursday morning in Washington with Israeli officials, including Prime Minister Naftali Bennett, was delayed, according to the White House.

One thought on “Explosions in Kabul, Afghanistan Today, August 26, 2021”