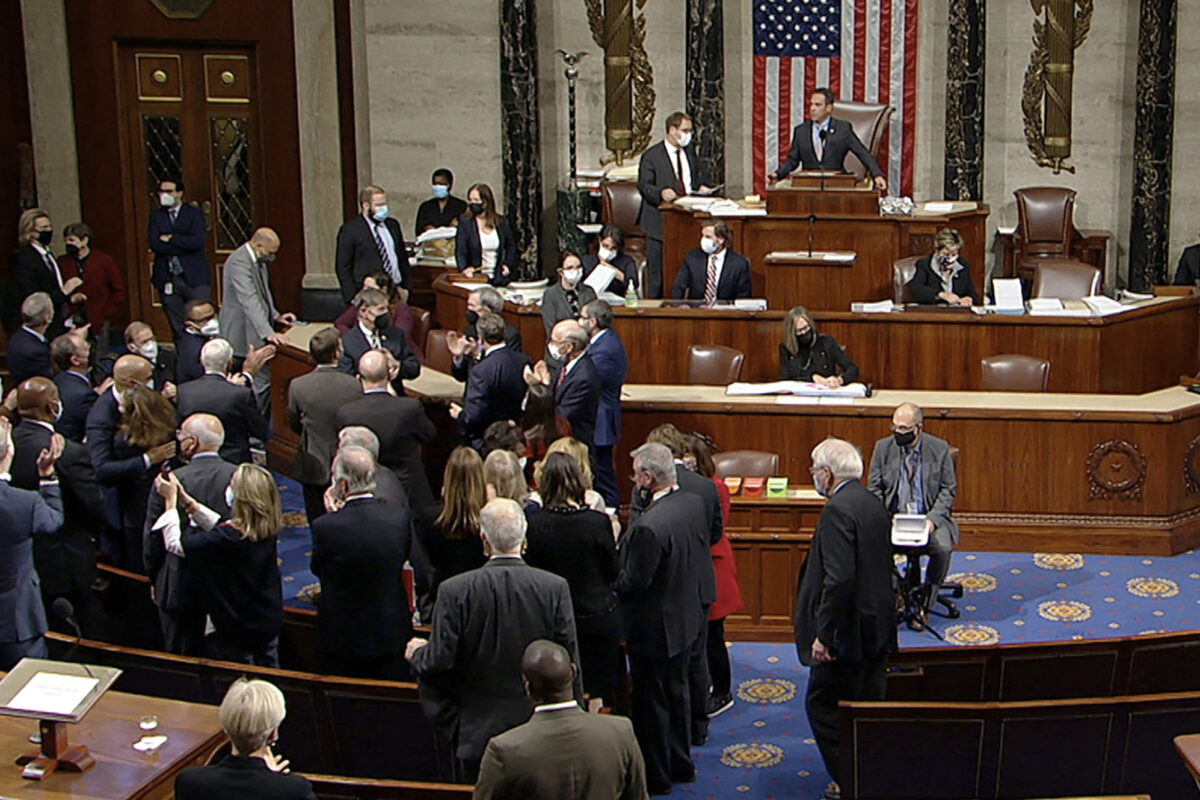 Amazing that 13 “Republicans” are willing to vote for something the communists in congress won’t. It’s obvious that we have deviated too far from what the constitution had in mind for us we need to flush it all and start over.

After a day of negotiations, the House of Representatives passed a bipartisan $1.2 trillion infrastructure bill, sending it to President Joe Biden’s desk late Friday evening.

The measure includes some $550 billion in new spending that seeks to fund the construction of roads, bridges and highways, public transport, water infrastructure, as well as power and broadband infrastructure, and cyber security, among other initiatives. It passed the Senate in August.

House Democrats late Friday had reached an agreement to vote on the bill, as well as to set up a separate future vote on Biden’s ambitious $1.75 trillion budget bill, also known as the Build Back Better bill.

Biden has struggled since September to garner support for his two-part economic agenda. The two pieces of legislation include the biggest upgrade of America’s roads, bridges, and airports in a generation, and the largest expansion of social programs since the 1960s.

House Speaker Nancy Pelosi (D-Calif.) had sought to hold votes on both bills on Friday but was forced to postpone the vote on the Build Back Better bill, after some moderate Democrats said they wanted a least 72 hours to review the text of the bill, and to review the Congressional Budget Office (CBO) and Joint Committee on Taxation (JCT) scores on the spending bill to understand the “true cost of the legislation.” They also wanted the Senate to confirm it would not make changes to the bill in the interim period.

The House went into recess late Friday night amid continued negotiations brokered by Biden and House leaders to reach a final agreement before the vote on the infrastructure bill.

Five moderate Democrats agreed to back the Build Back Better bill if CBO estimates are consistent with preliminary numbers that the White House and congressional tax analysts have provided. The group, led by Rep. Josh Gottheimer (D-N.J.), said in a statement that if the fiscal estimates raise problems, “we remain committed to working to resolve any discrepancies in order to pass the Build Back Better legislation.” The other four Democrats in the group are Reps. Ed Case (D-Hawaii), Stephanie Murphy (D-Fla.), Kathleen Rice (D-N.Y.), and Kurt Schrader (D-Ore.).

Moderates have forced leaders to slash the roughly 2,100-page bill to around half its original $3.5 trillion size. Republicans say it is too expensive and damaging to the economy.

In a White House statement around 9 p.m. ET, issued shortly before the House was expected to start voting on the infrastructure bill, Biden urged all House members to support the two bills, saying that he is “confident that during the week of Nov. 15, the House will pass the Build Back Better Act.”

Moderate and progressive Democrats had released separate statements committing to vote on the two measures.

“Tonight, members of the Progressive Caucus and our colleagues in the Democratic Caucus reached an agreement to advance both pieces of President Biden’s legislative agenda,” Congressional Progressive Caucus Chair Rep. Pramila Jayapal (D-Wash.) said in a statement. “Our colleagues have committed to voting for the transformative Build Back Better Act, as currently written, no later than the week of November 15.”

“We commit to voting for the Build Back Better Act, in its current form other than technical changes, as expeditiously as we receive fiscal information from the Congressional Budget Office—but in no event later than the week of November 15,” Gottheimer said in a statement.

Reuters and The Associated Press contributed to this report.

Vaccines are very good… for the drug companies