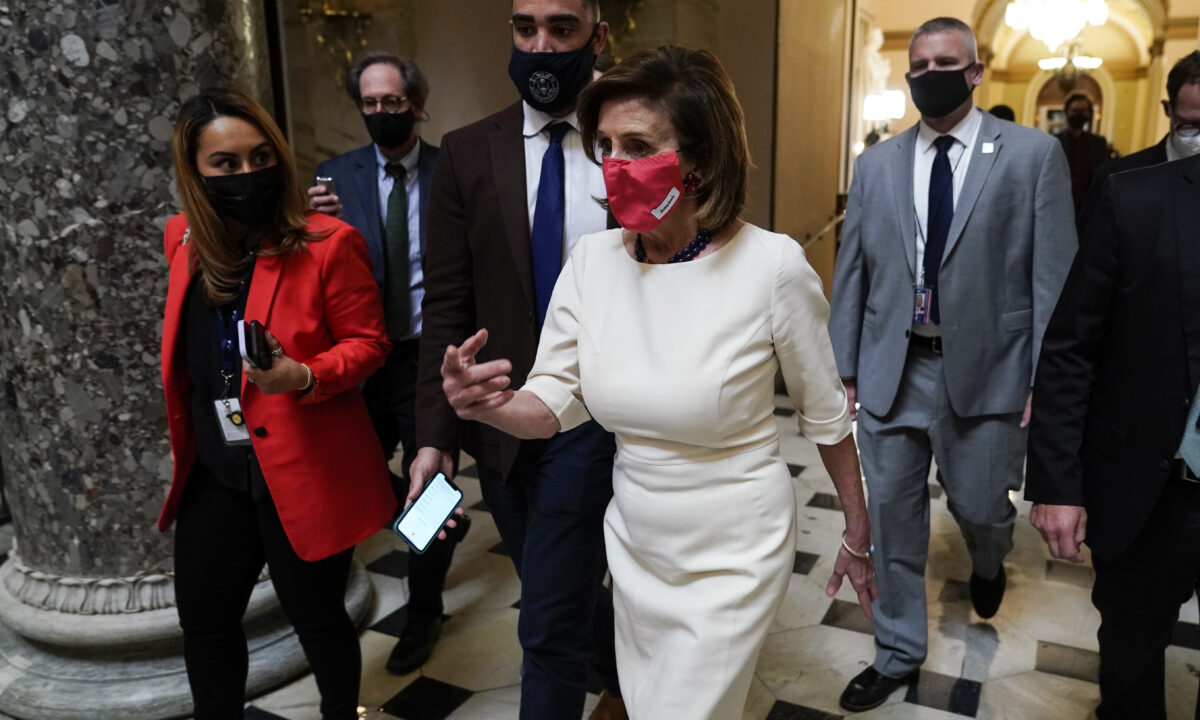 The House of Representatives scheduled to vote on Friday on President Joe Biden’s agenda—consisting of the $1.2 trillion bipartisan infrastructure bill and Democrats’ partisan Build Back Better $1.75 trillion budget bill—has been stalled by moderates demanding several concessions from leaders.

Despite fissures in the party, leadership decided to schedule a Hail Mary vote on the agenda today.

As a last-ditch effort to prevent a vote on the bill, Republicans called for a vote to have Congress adjourn for the day in a motion put forward by Rep. Andy Biggs (R-Ariz.); Republicans have been unanimously opposed to the budget since its introduction, but a few have lent their support to the infrastructure bill.

The motion lingered on the floor into the afternoon on Friday, with little sign that it will be concluded any time soon. According to House Minority Leader Kevin McCarthy (R-Calif.), the vote was dragged out so long because Democrats are trying to work out an eleventh-hour deal with different elements of their party.

Speaking at a press conference while the motion to adjourn lingered on the House floor, McCarthy chuckled about the situation.

“Can you believe the vote is still open?” McCarthy asked as he took the podium. “You know, we made history today,” he continued. “This is the longest vote held open in the history of Congress.”

McCarthy judged that the vote had not been concluded because Democrats “don’t have the votes [for Biden’s agenda] today.”

Democratic leaders do face several challenges as they try to secure a Friday passage of the two bills.

In the House, several moderates have put forward a string of demands before they will consent to support the bill.

“We cannot lend our support to advancing the [Build Back Better] Act until we have had a chance to review these scores which provide the true cost of the legislation,” the moderates wrote. Specifically, they demanded 72 hours to review the text of the bill, confirmation from the Senate that the upper chamber will not make changes to the bill, and “the proper CBO/JCT scoring information.”

Confirmation from the Senate on this front will be difficult to receive as several challenges persist in the upper chamber as well.

Most notably, Sen. Joe Manchin (D-W. Va.), a self-described “conservative Democrat,” has broken with his party over several policies in the budget, including certain climate provisions, paid family leave programs, and many more. Despite months of negotiations and a significantly cheaper bill to work with, Manchin has yet to commit to voting for the legislation.

Another key swing vote, Sen. Kyrsten Sinema (D-Ariz.), has also declined to make a public commitment to support the bill.

Aside from these two, other moderates in the upper chamber, including Sens. Mark Warner (D-Va.), Robert Menendez (D-N.J.), and Jon Tester (D-Mont.) have in the past expressed reservations with some policies proposed by their party.

On the other side of the ideological spectrum, Sen. Bernie Sanders (I-Vt.) has demanded that the budget bill be “strengthened.”

In the House as well, Democrats hold an extremely thin majority. Pelosi can spare only three defections from her caucus if she hopes to pass both bills; These five moderates are more than sufficiently armed with the votes needed to tank the agenda.

Pelosi is currently in closed-door negotiations with the moderates, and Biden indicated in a Friday morning press conference that he will be going to join in the discussion.

Rep. Michael Burgess (R-Texas), an opponent of the budget reconciliation bill, insisted that the vote be concluded.

“217 votes represents a clear majority on your side,” Burgess told the Democratic presiding officer in the lower chamber. “The vote will not change, regardless of who shows up. It is time to close this vote.”

“It is anatomically impossible to defeat this with 217 votes that don’t exist,” he added.

However, the motion remains on the floor, and there is no indication of when it will be concluded.

Vaccines are very good… for the drug companies