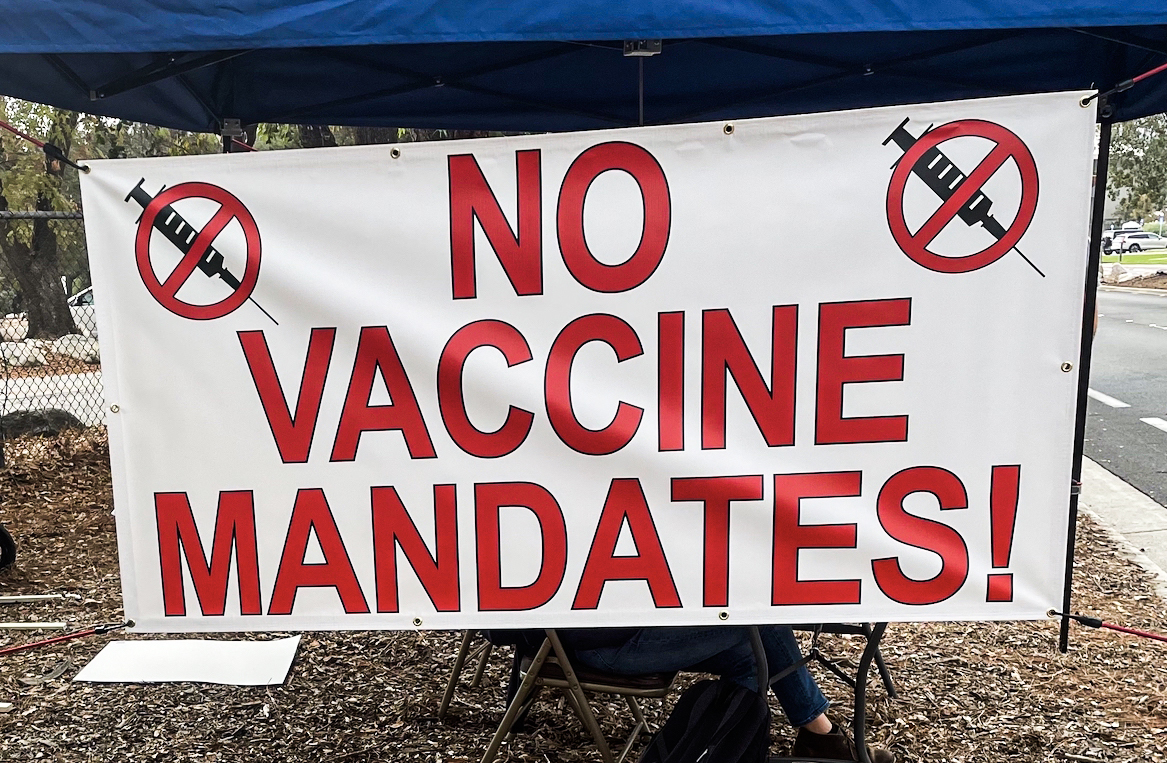 A nationwide strike against vaccine mandates will take place from Nov. 8 to Nov. 11, according to the main organizer for the walkout, Leigh Dundas, a human rights attorney, and public speaker.

The event will kick off in Los Angeles on Monday. The locations of the marches have not yet been disclosed.

The walkouts involve people from various industries such as trucking and telecom. Air and rail transport workers are not federally allowed to go on strike due to a law passed in 1926 named the Railway Labor Act, but some plan to protest anonymously.

“The Golden Gate Bridge Rally is going to be an epic and unprecedented moment in time. It will mark—on Veterans’ Day evening—a 4-day Nationwide walkout, by rank and file workers everywhere, from blue-collar to white-collar, black, white, yellow, red, every faith, every creed, who are uniquely united despite their differences on one common truth: that vaccine mandates have no place in a truly free society,” Dundas told The Epoch Times.

“Every group: anti-vaccine, BLM, gay, straight, Jewish, Muslim, Native American, Asian, Latino, Christian, atheist—all groups—are coming together for this one historic moment in time—to trumpet not just to our own government, but indeed to the watching eyes of the world, that vaccine mandates will no longer be tolerated. That in this country, WE are the government, because our founding fathers knew this truth: a truly free nation is a nation of the people, by the people, and for the people. That we are the leaders we have been waiting for. And that today marks the day that we retire vaccine mandates as a concept that cannot live in a free society, and that we are, indeed, simply that: a free society.”

Kristen Grace has been a Raytheon Systems Engineer for 18 years.

“I will lose my livelihood on December 8, because I won’t allow experimental gene therapy to be injected into my bloodstream. I’ve recovered from COVID, and I work from home, but the government has claimed authority over my body and medical choices. I choose natural (God’s) immunity over government,” Grace said.

Brandon Childs has been serving for 7 years in the Air Force, 5 years in active duty, and 2 years with the Arizona Air National Guard (ANG).

“I have stepped away from being ANG full time due to the mandate and I was promised by my civilian job that they would never require the vaccine.

“However as an army contractor that changed within the last month. I’ve lost 3 family members in the last year one being my father a week ago. I’ve put in RE’s [religious exemptions] at both and was told that the chances of being accepted are extremely dismal and I will face what looks like a general or dishonorable discharge (with a clean military record) from one and termination for the other. Affecting the benefits I have worked for and bled for the country I love.”

Another systems engineer that has been working for Raytheon for 25 years told The Epoch Times: “I’ve submitted a Notification of Religious Accommodation. If it’s not approved, I’ll be fired on December 8th because I’m not going to violate my beliefs or surrender my Constitutional rights for a job. Honestly, this is the most stressful year of my professional life. I’ve lost many nights of sleep. Even if approved I’ll likely continue to look for a new job.

“I feel betrayed by a company I’ve given my best years. They could have stood up for us but they put profits and the ‘woke’ agenda first. I’m surrounded by fully vaccinated people with new and mysterious health issues, many have gotten COVID, but I’m treated like someone unclean, less than. Science, logic, and common sense have been tossed in the COVID dumpster fire. While I love my country, I’m ashamed of my company and my government. The only good news is that even the fully vaccinated now realize the promise of normality was all a lie. Now they are once again masked and being told boosters will be mandatory. And they are now rising up too,” the engineer said.

Christopher Burns, an attorney that works in Portsmouth New Hampshire, said: “For the first time in the history of the country the president and an entire political party seem to think it’s constitutionally appropriate to dictate to a private employer how to treat its private employees by requiring the employer to demand privately protected health information from the employee.”

Jet, a Honeywell employee, feels disappointed and is depressed about his company mandating the vaccine, which he is determined not to take due to his religious beliefs.

“I have so many feelings about this situation that it has gotten me into a state of depression. Never in a million years [had] I imagined that something like this would happen in the United States. This is what tyranny looks like and it’s not going to stop here. Equally disappointing is to see that Honeywell, along with the rest of major U.S. corporations has decided to go along and enable tyranny. I’m not getting the vaccine. I have applied for a religious exemption. If not granted, so be it. Because of this mandate, we’re now going to be treated as second-class citizens. In case people have forgotten, this is the definition of tyranny: cruel and unfair treatment by people with power over others.”

A consultant for Thomson Reuters who does not even work physically at the company is bewildered at why he should take the vaccine.

“I have been working [for Reuters for] 13 years and at least 3 consultants are 100 percent remote, 2,000 miles away from the office! They say because the company has government contracts that mean I have to abide by the mandate too.

“How am I endangering anybody from my home?” the consultant asked.

John Knox is part of the LA Firefighters for Freedom.

“We are fighting against these unconstitutional mandates because anything that is repugnant to the constitution is illegal. These mandates clearly step outside the constitutional parameters. As firefighters and first responders we need to take a stand and we need to let the rest of America know we will fight and they can join us,” Knox said.

‘It Is Against Our Rights as Americans’

A Maine 3rd Grade School teacher thinks the COVID vaccines should not be mandated.

“People have the right to make the choices that work best for their families and for themselves. I feel it is against our rights as Americans. Why are we dying on this sword?” the teacher asked.

Amtrak’s vaccine mandate deadline is also on Dec 8, an employee told The Epoch Times about her situation under the condition of anonymity.

“Employees with religious exemptions are either 1. Denied with no explanation, or 2. ‘Approved’ for unpaid ‘personal leave,’ and not allowed to seek other work while on involuntary ‘personal leave.’ This ‘accommodation’ is exceptionally harsh and retaliatory, considering that medical exemption employees are permitted to continue work with weekly testing, including full customer contact workers such as conductors,” she said.

“Any employee not in compliance with the vax mandate will be charged with insubordination and terminated, per Amtrak repeated internal announcements.”

Eric Mallow, a railroader, said: “The longer we comply with their tyranny, the worse this will get! We were absolutely essential last year and now we are completely expendable. Standing up for the rights of Americans far outweighs the difficulty of leaving a company that sees me as an insignificant number.”

A secretary from Arizona told The Epoch Times that the mandates are a “total violation” of her freedom.

“Where does this end? If they can force vaccines in our bodies and violate our will that way, where is the line drawn? We need to fight back and not allow this,” the secretary said.