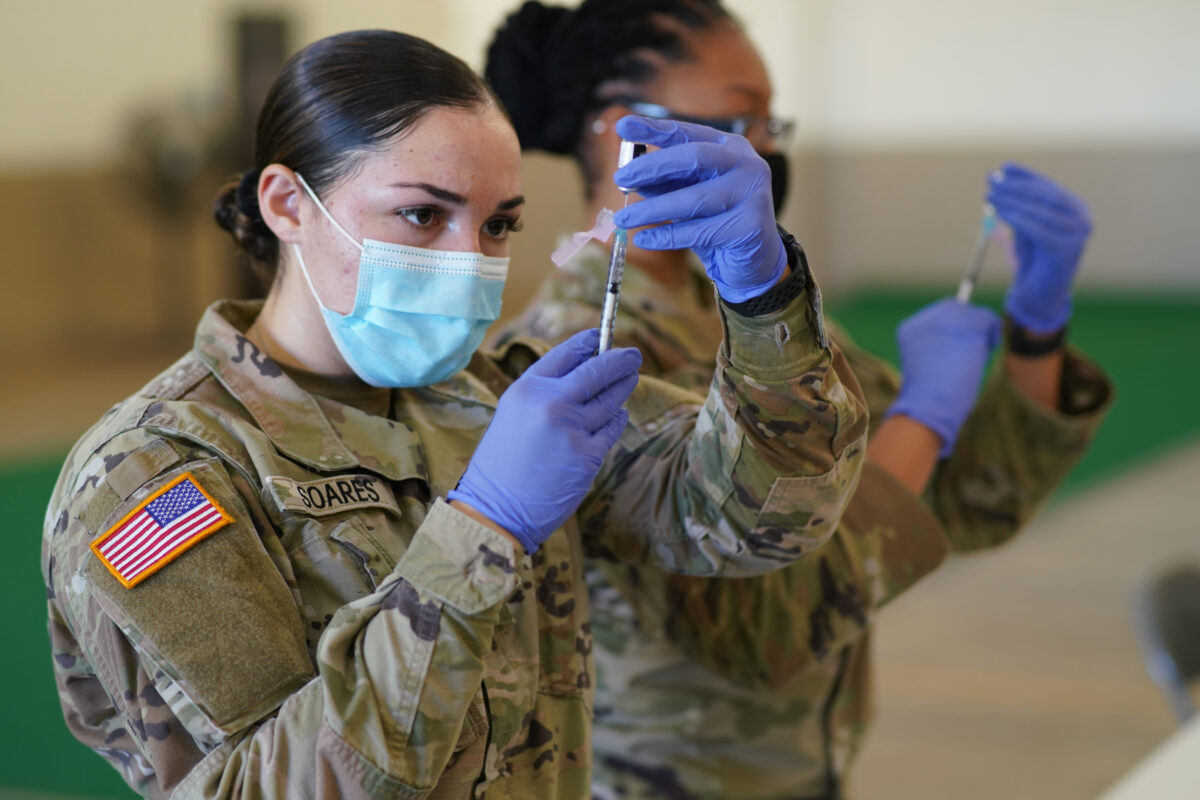 At least four states in recent weeks have called in members of the National Guard to deal with health care staffing issues amid COVID-19 vaccine mandates for hospital and nursing home workers.

Late last week, Indiana became the latest state to deploy the National Guard to hospitals. The Indiana Department of Health confirmed to local media that Guard members were sent to 13 facilities after officials with Indiana University Health, the state’s largest hospital system, made the request.

Indiana University officials said it’s dealing with “all-time highs” of both COVID-19 and non-COVID-19 patients. Earlier this year, about 125 Indiana University health care workers were fired for not complying with the system’s vaccine mandate, although the hospital said at the time that most fired workers were part-time.

“As COVID cases continue to increase and hospitalization of COVID and non-COVID patients reach all-time highs, the demand and strain on IU Health’s team members, nurses and providers have never been greater,” Indiana University Health said over the weekend, adding that it “will leverage all available resources and enlist members of Indiana’s National Guard, in conjunction with the Indiana Department of Health, to assist in areas of critical need.”

Six-person National Guard teams with both clinical and nonclinical members will be sent to Indiana University hospitals in two-week intervals, officials said.

In New Hampshire, authorities confirmed several days ago that about 70 Guard members would be deployed within the coming weeks to provide non-clinical support at medical care facilities.

“Primarily, we’re going to start with non-clinical care in the hospitals, and the primary reason why is—we’re a part-time force,” National Guard Maj. Gen. David Mikolaities told local media in a statement. “And for us to utilize our doctors and nurses and physician assistants, we don’t want to take away from the health care system that is already strained.”

“If unfortunately during the winter months, the hospitalization rates continue to increase, we’ll be more than happy to provide additional resources,” Mikolaities said.

Maine’s largest hospital—the Maine Medical Center—” has had no critical care beds available” during the past week, said CEO Joel Botler in a statement, adding that the hospital had to shut down six operating rooms in addition to the six that were previously closed.

And in New York, Gov. Kathy Hochul, also a Democrat, announced that the state’s National Guard would conduct a similar mission at state hospitals.

The Guard will deploy some 120 Army medics and Air Force medical technicians to 12 long-term facilities and nursing homes “to ease staffing shortages,” according to a statement from the National Guard. Gov. Kathy Hochul, a Democrat, issued the order at the start of December, citing what she said is a seasonal rise in COVID-19 cases.

The decision came weeks after thousands of New York-based health care workers were placed on unpaid leave following the implementation of Hochul’s COVID-19 vaccine mandate, which caused staffing disruptions. Neither Hochul nor the Guard has mentioned the COVID-19 mandate amid the deployment.