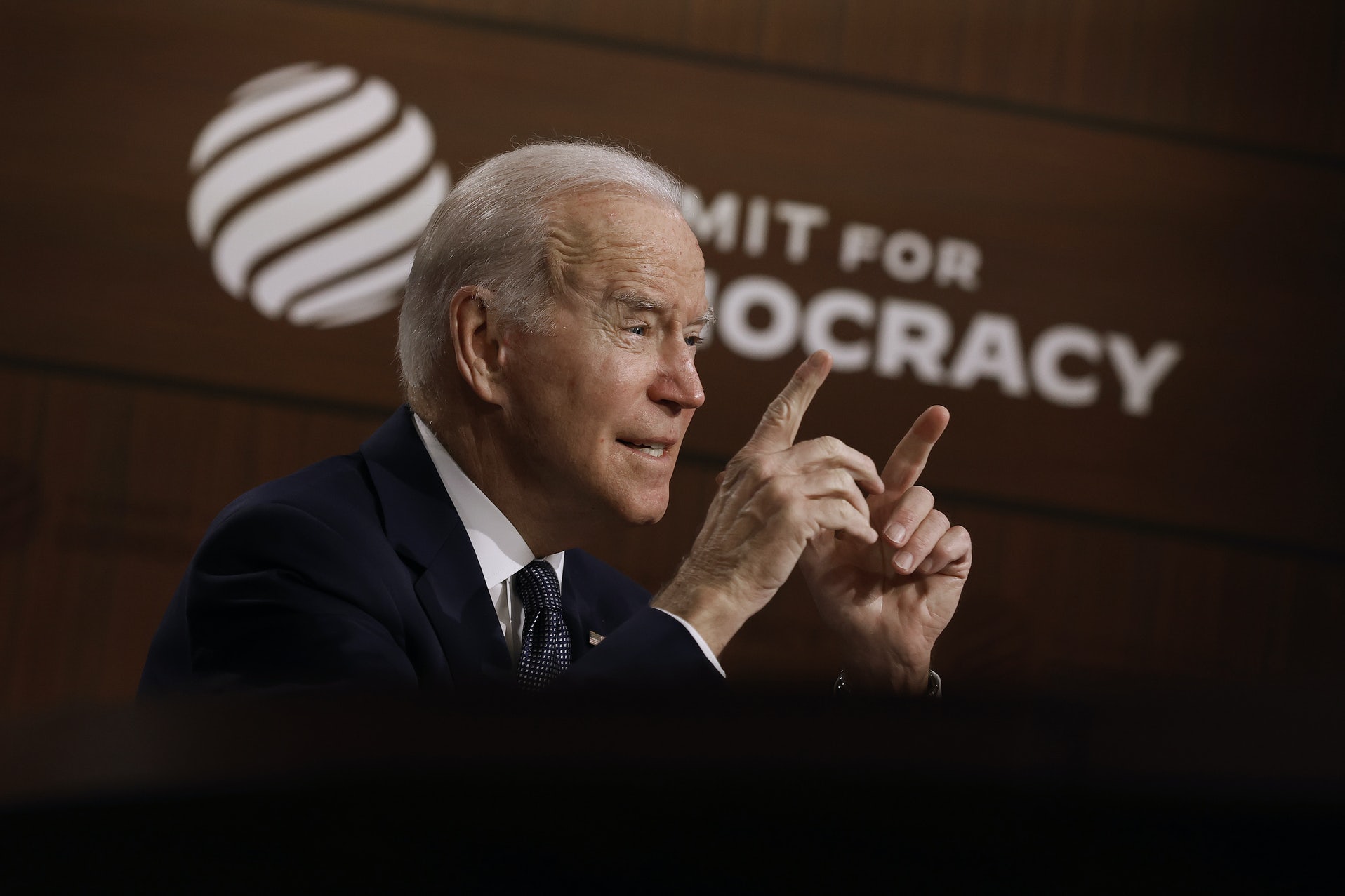 As concerns mount over the future of free and fair elections, a debate has broken out about whether the media must protect Biden to save the republic.

This week, President Joe Biden hopped onto Zoom in an effort to shepherd the world along the path to stronger global democracy, during a two-day summit with other world leaders. He’ll be making his case, however, amid growing concerns about democracy here at home. On Monday, The Atlantic’s dedicated doomscroll provider, Barton Gellman, unleashed his latest flurry of frets, warning that “Trump’s Next Coup Has Already Begun.” His masthead-mate, George Packer, followed up with a piece that urged readers to imagine democracy’s unthinkable demise in order to stave it off.

Whether we like it or not, there is reason to be gravely concerned. But against this backdrop, an interesting debate has broken out about the press’s role in protecting our too-fragile institutions and raveled civic fabric from a Trumpian assault—and whether the media, in an effort to support democracy, must unflinchingly support Biden, as well.

Over the weekend, The Washington Post’s Dana Milbank made considerable waves with a column that rather lustily accused the media of offering President Biden worse coverage than President Trump. At first blush, this might seem impossible, if only because Trump’s actions—through corruption, incompetence, and the need to constantly battle the media—made it almost impossible to cover him favorably. Milbank, however, marshaled some statistics from data analytics experts, who combed through hundreds of thousands of articles to provide a detailed “sentiment analysis” supporting his thesis that “Biden’s press for the past four months has been as bad as—and for a time worse than—the coverage Trump received for the same four months of 2020.”

But Milbank’s most provocative idea posited that the media needed to be “partisan” in the service of democracy. “The country is in an existential struggle between self-governance and an authoritarian alternative. And we in the news media, collectively, have given equal, if not slightly more favorable, treatment to the authoritarians.”

Not everyone took this message well. Politico’s Ryan Lizza responded to Milbank on Twitter: “No respectable model of salvaging democratic norms would include badgering journalists to write only positive stories about the most powerful person in the world.”

Lizza is correct. Blind fealty to heads of state is the hallmark of dictatorships, not democracies. If democracy was measured along those lines, we’d be looking to Equatorial Guinea for guidance, not Joe Biden. How does it profit democracy to give Biden a pass on, say, overselling the insulin price reductions in the Build Back Better bill? Accountability is central to any cause of democracy. When Jen Psaki rudely mocks the idea of sending free rapid tests to every American, any defender of democracy—keenly aware of the public need and the potential to revive such civic spirits—would and should offer a riposte.

Moreover, while Biden is certainly no enemy of the democratic process—and not solely to blame for the fact that Democrats in Congress have failed to pass a voting rights bill—it’s not clear he’s truly earned the right to be considered one of its most ardent defenders. His administration’s tepid response to the threat of voter suppression is a case in point: In August, the White House dubiously suggested that it could be “out-organized.” In October, The Atlantic’s Peter Nicholas reported that a White House official reduced voting rights to the level of a boutique concern among a niche constituency: “Every constituency has their issue.… If you ask immigration folks, they’ll tell you their issue is a life-or-death issue too.”

A more recent White House fact sheet detailing what the administration has done to “restore and strengthen American democracy” led with an unrelated matter: the passage of the infrastructure bill. As The Guardian’s Sam Levine put it: “The section on voting rights here is a little bit of accomplishment-padding.” Perhaps Biden deserves fairer coverage, but that doesn’t mean it’s fair to credit him for things he hasn’t done.

Still, if Milbank perhaps muddled his point with his long prelude about the quality of Biden’s coverage, by going out on that limb, he successfully brought attention to a more urgent underlying matter: The GOP is the enemy of democracy, full stop. It’s not Democrats who are waging a well-funded war to suppress the vote, reviving Jim Crow–era electoral tactics, installing apparatchiks and gaming the rules to subvert voter intentions, chasing dedicated election officials out of their posts with threats and intimidation, or fomenting political violence. These are the deeds of Republicans alone, and Milbank’s willingness not to subject the matter to the media’s pathological “both-sides” tendencies should be commended.

This nevertheless leaves the original tension between what Milbank saw as poor coverage of the president and the need to help preserve the republic unresolved. Perhaps the answer is one of perspective. No true “partisan for democracy” can simply be a reflexive defender of a politician. No matter how well-intended, adopting this tendency will only further undermine the civic edifice—and it plays into the hands of democracy’s would-be gravediggers. But politicians are the servants of democracy; its beneficiaries are ordinary Americans. They are who truly deserve our best effort and our best coverage. It’s possible to achieve everything Milbank wants by putting the American people in front of mind.