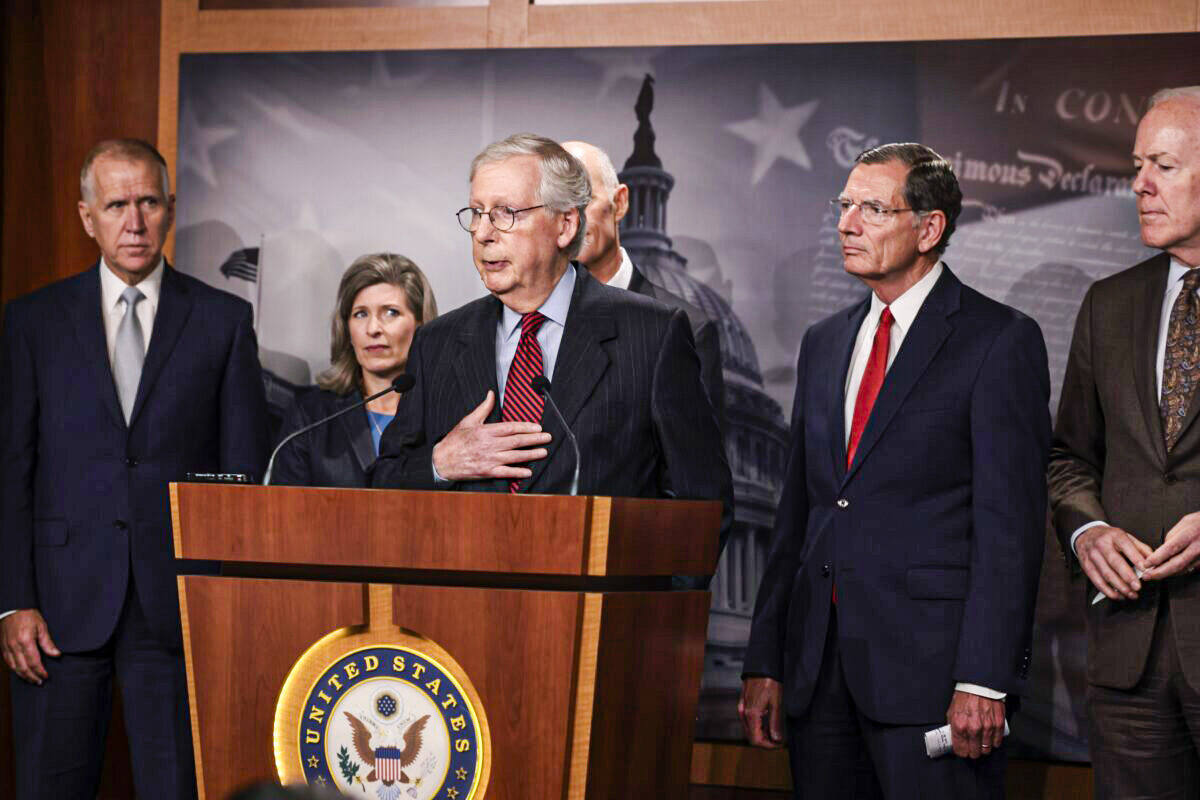 Senate Minority Leader Mitch McConnell (R-Ky.) and other Republicans are advising President Joe Biden not to “outsource” his Supreme Court pick to “the radical left,” warning that they will fight hard against the confirmation of anyone they consider too left-wing.

Liberals, fearful of losing another seat on the 6–3 conservative-leaning court, had for months pressured 83-year-old Justice Stephen Breyer to step down while a Democrat held the White House. After a flurry of rumors that his retirement was imminent, Breyer officially announced on Thursday that he will step down at the end of the court’s term this summer.

The White House confirmed on Thursday that Biden would stand by a promise made on the campaign trail to appoint a black woman to the Supreme Court.

Following Breyer’s official announcement, Senate GOP Leader McConnell advised Biden not to allow “the radical left” to take over the nomination process. McConnell noted that Biden, whose party took the Senate by the thinnest possible margin, does not have the mandate to appoint a radical justice.

“The American people elected a Senate that is evenly split at 50–50,” McConnell said in a statement. “To the degree that President Biden received a mandate, it was to govern from the middle, steward our institutions, and unite America.”

“The President must not outsource this important decision to the radical left,” McConnell continued. “The American people deserve a nominee with demonstrated reverence for the written text of our laws and our Constitution.”

Hawley took to Twitter to warn Democrats that they should “expect a major fight” if Biden tries to appoint a “woke activist” to the nation’s highest court.

Republican National Committee (RNC) Chairwoman Ronna McDaniel predicted in a statement that Biden’s nominee would be a left-wing radical.

Biden’s nominee, said McDaniel, will be an “activist judge who will rubber-stamp the far-left’s political agenda.”

“This type of judge,” McDaniel said, “is a threat to Americans’ constitutional rights including religious liberty, the Second Amendment, the right to life, and free speech.”

“The RNC will do everything in our power to expose Biden’s Supreme Court nominee and hold Senate Democrats accountable in November for their votes,” McDaniel vowed.

Sen. Chuck Grassley (R-Iowa) noted in a press release that he had supported Breyer’s confirmation in 1994, as had most other senators.

Still, Grassley expressed his hope that the nominee is someone “within the legal mainstream … who can receive broad, bipartisan support.” Grassley ruled that “[s]uch a candidate will preserve faith in the court, and reflect Americans’ will when they elected an evenly divided Senate.”

Despite their nominal majority, Democrats could face a challenge in pushing through too partisan a nominee.

For one, Republicans could block the nominee from moving beyond the Senate Judiciary Committee, where both parties have an equal number of votes.

This is due to rules worked out between GOP Leader McConnell and Democratic Leader Chuck Schumer (D-N.Y.) at the beginning of the 117th Congress; 50-50 splits in the Senate are extremely uncommon in U.S. history and pose significant obstacles to the legislative process.

For example, during the 116th Congress, when Republicans held the Senate, the GOP had 12 seats on the Judiciary Committee while Democrats had only 10. When the Senate is not equally divided, committee votes usually turn out a clear majority. Bills or nominees that receive a majority vote are reported and sent to the legislative calendar for floor consideration.

But in a committee with equal representation on both sides of the aisle, tie votes are far more common, which threatens bills with death by committee limbo. S. Res. 27 overrides existing Senate rules and allows the committee chairman—in this case, a Democrat—to report a bill or nominee anyways in the event of a tie.

Thus, even if all 10 Judiciary Republicans opposed a nominee, Senate Judiciary Chairman Dick Durbin (D-Ill.) would still be able to advance the nominee to the Senate floor.

The other option for Republicans to challenge an appointee they consider too radical would require at least one Democratic defection.

Before, ending debate on Supreme Court nominees to move to a final floor vote required 60 votes. After using the nuclear option, Republicans lowered the threshold to 51 votes. This decision could come back to haunt the party soon, as they find themselves in the minority.

If all 50 Democrats agree on advancing a nominee, Vice President Kamala Harris will be able to cast her tie-breaking vote to end the debate and allow the final confirmation vote. In this event, there will be practically nothing that Republicans can do to stop the confirmation.

However, in the event of at least one Democratic defection, Democrats will be unable to meet the 51-vote threshold.

If Biden’s pick is too radical for GOP tastes, Republicans could turn to Senate moderates Joe Manchin (D-W.Va.) and Kyrsten Sinema (D-Ariz.) as potential defectors.

Speaking to a West Virginia radio station, Manchin did not rule out voting for a nominee who was more left-wing than he is—but neither did he commit to voting for anyone the president sends to the Senate.

In any event, Republicans have made clear that they will do all in their power to oppose any nominee that is too left-wing. Should Biden move ahead with a radical pick despite these warnings, the nominee would run the risk of alienating crucial moderate votes.

The White House said on Thursday that Biden would make his choice by the end of February.